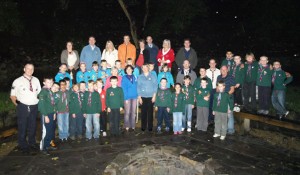 During a cold a damp weekend in June 2008 members of the Pendle View Rotary Club (PVRC) undertook a task of mammoth proportions to assist the 38th.

As you may be aware the Warren was re-opened in 2006, but during the rebuild process behind the Warren was left in disarray and used somewhat as a dumping ground.  We lost the old camp fire circle that was built by original members of the Group, and the area was not particularly safe for use by children.

The PVRC offered their services free of charge and undertook the task of preparing the land for building work to commence to repair and replace the camp fire circle. This work took two days to do, and was carried out by groups of three of four members doing different shifts during the course of the day.

Peter Churnside, who sadly passed away last year, used to be a Venture Scout Leader at the 38th and later moved on to become a member of the PVRC.  Both his son and daughter are current members of PVRC and suggestions were made that it would be a mark of respect to volunteer the organisations services to our Group.

We would like to thank the Pendle View Rotary Club for considering our Group for their charitable works, and let them know that we appreciate all they have done for us.

If you would like to become a member of the PVRC or wish to ask for their assistance with your own project,  please visit the Pendle View Rotary Club website for details.