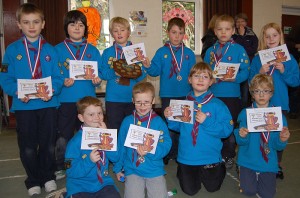 For the second year running, 10 young Beaver Scouts from the 38th worked hard to win the District Beaver Scout Akeema Shield competition.  Five other teams competed in this annual event our Colony winning by a very tight margin of just 3-points (236 to the nearest team on 233)!

Two rounds of activities were undertaken which included egg & spoon, sack race, box & broom, skipping, hockey relay and a memory game based around a twister mat.

The team then went on to represent Rossendale in the County competition two weeks later and came third.  Well done to all of them!