The 38th Rossendale (OPEN) Scout Group was formed in 1951, with our first Scout Camp being held in 1952. It was an event that went down memorably in group history as probably the wettest camp on record. In fact it was so wet, the coach got bogged down in the mud and had to be rescued! Incidentally, the campsite used for this inaugural camp, at Parbold, is still in use by the group today.

Our original headquarters was built in 1960. The building of the first ever ‘warren’ lasted approximately 12 months. If you’re one of the people who helped build the warren, please get in touch and let us know what you’re up to now. The “Warren”, as our headquarters is affectionately known to the group, has been in constant use ever since.

One challenge we always face, is the ever increasing costs of running the group. To this aim, we run fund raising activities on a regular basis, the first of which was a Garden Party, in 1960, at which a grand total of £22 was raised to help pay for the new Hut. Admittedly not much by todays standards, but at the time it was a most worthy effort.

In May 1984 we became the first group in East Lancashire to form a Beaver Scout Colony, taking in boys aged 6 – 8. This was initially an experimental section of the Scout Association, only becoming official in 1986. 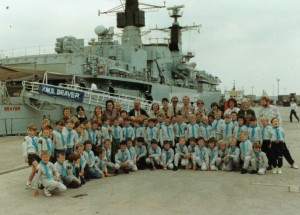 Another first for our group came in May 1990, when we accepted girls into the group. Girls are now accepted in every section of our group from Beavers up.

In 1999 our efforts in landscaping the area around our headquarters were wonderfully rewarded when we received a “Special Mention Award” in the Queen Mother’s Birthday Awards. We believe this is the first time an individual Scout Group has received such an award, and were very proud to receive it. 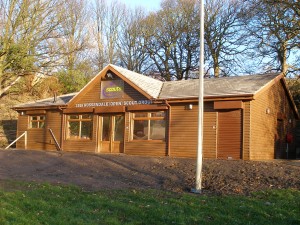 In 2006 a sad event for one club, became the beginning of a dream come true for the 38th. As a result of a War Veterans club being forced to close its doors, we received a cheque for £20,000 from the Discharged and Demobilised Sailors and Soldiers Club, putting us well on track for our new headquarters. Our new ‘hut’ was officially opened on the 20th May 2007 by Sam Aston, otherwise known as Chesney from Coronation Street. We would like to thank all those who made the kind donations that made this possible, and secured the future of our group for the young people who enjoy Scouting at the 38th so much.