A Cub down under! 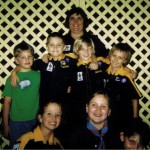 Dedicated to Scouting was one of our Cubs on a recent trip to Queensland Australia.  Missing her weekly Pack meeting back home, she took the opportunity to visit a Pack whilst on holiday.  Not only did she attend two meetings she went to camp with them as well!!

She commented that their Pack was smaller than hers but much was familiar for example the raising of a flag at the beginning of a meeting.  At the end of a meeting the flag was lowered and all members shake Emu’s (Akela’s) hand.

During the first meeting they played games outside and also did some compass work followed by a hunt using the compass.  At the second meeting they discussed the history of Baden Powell and the Cubs in Australia.  She also shared photos of her own Cub Pack.

On camp she had a fantastic time.  Three Packs were involved – Maleny, Beerwah and Glasshouse Mountains.  The District Commissioner joined them also and said to her mum “Oh, you’re the ones from ‘up top’!”  She also gave her some badges to keep as a memento of her visit.  One of the badges related to the Australian Police whose history they learnt about.  Activities included go-karting, abseiling and an obstacle course.

She was sad when it all came to an end on what was a once in a lifetime experience that she is unlikely to forget!